Violence against Protesters and Diplomatic Scandals 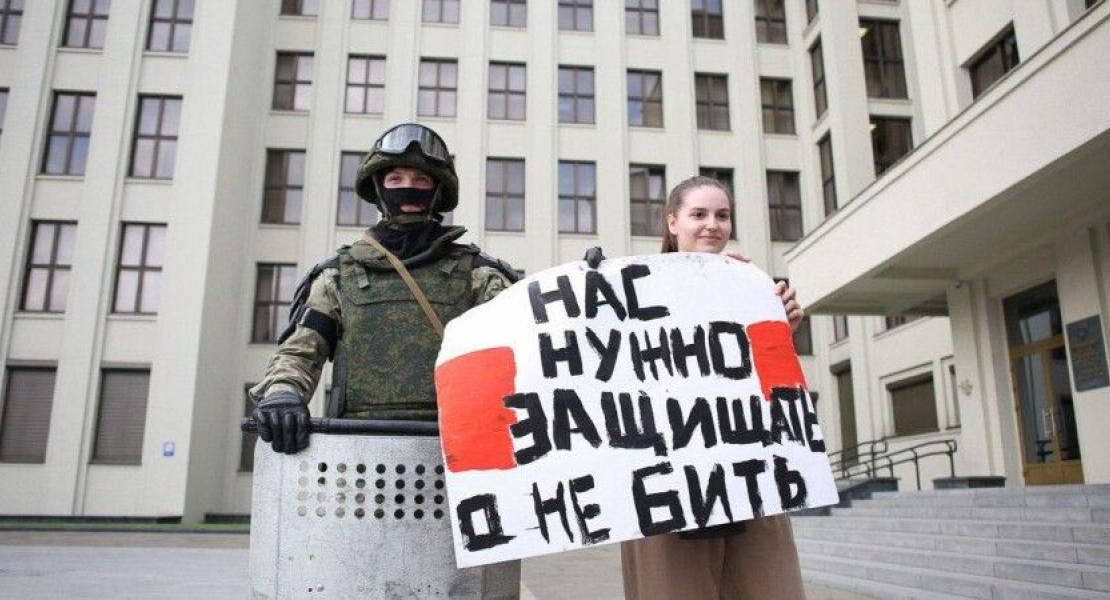 Domestic policy: “Round table” in the KGB detention centre and Tsikhanouskaya’s ultimatum

Peaceful street protests continued throughout October. In addition to the general Sunday marches (with from tens of thousands to hundreds of thousands of participants), there were also marches of pensioners, marches of mothers, marches of people with disabilities. The government continues to respond with reprisals: since the beginning of the protests, more than 15,000 people have already been detained (including journalists, regardless of whether they have accreditation or not), more than 100 people have been recognized as political prisoners, protesting employees of state enterprises are being fired and students are being expelled. The protest marches are accompanied by the mobile Internet shutdown and closure of the central metro stations.

With ever-increasing frequency, one can see security forces armed with firearms, including automatic ones, besides the traditional arsenal (stun grenades, tear gas, water cannons, etc.). So far, it is mainly used for psychological containment, but there have been shots into the air. The security officials are directly threatening to shoot the protesters from the military weapons.

Sviatlana Tsikhanouskaya presented her ultimatum, according to which a general strike should begin on October 26. So far, the strikes are targeted and cause not so much economic but psychological damage: the authorities are nervous, they do not know where to expect the next workers’ performances.

At the same time, Lukashenka seeks to split the protest movement and replace the protest agenda by discussing some amendments to the Constitution. They invite loyal political forces and business unions to these discussions. The time frame for the constitutional amendments is tight but uncertain, as is the mechanism for their adoption. On October 10, Lukashenka even gathered some political prisoners in the KGB pre-trial detention centre at a “round table”, allegedly for a dialogue on constitutional reform.

“On October 10, Lukashenka gathered some political prisoners in the KGB pre-trial detention centre at a “round table”, allegedly for a dialogue on constitutional reform.”

For fear of the growing workers’ discontent, the authorities are trying to support employment at the state-owned enterprises and provide them with subsidies of at least €650 million, although they previously planned to abandon this harmful practice.

Against this background, enterprises are growing stocks of unclaimed finished products (€1.7 billion worth), and the public has devaluation expectations. However, the National Bank still manages to keep the Belarusian ruble exchange rate, although inflation is accelerating.

Belarus received a $500 million loan from the Russian-controlled ESFR, but this money immediately went for debts to Gazprom, and it was not enough to pay the interest. Moreover, Belarus will not get €5.8 million from the EU within the framework of the cross-border cooperation program since the tranche is blocked by Lithuania.

The EU has adopted the first package of sanctions on Belarus and is preparing the second, which will include Aliaksandr Lukashenka.

For the first time, the Belarusian Ministry of Foreign Affairs imposed retaliatory sanctions against the European officials and also demanded that Lithuania and Poland cut down the staff of the embassies in Minsk. As a result, almost all EU countries recalled their ambassadors from Minsk for the consultations. The Ambassador of Ukraine was handed a note because of Volodymyr Zelensky’s decree on attracting highly qualified specialists from Belarus to the country.

EU High Representative for Foreign and Security Policy Josep Borrell said in the European Parliament that the situation in Belarus is not improving, and the prospects for dialogue are limited: “I say limited, so as not to say anything at all”. And this was after the telephone conversation with the head of the Belarusian Ministry of Foreign Affairs Uladzimir Makei.

The United States also imposed sanctions for Lukashenka to secure the release of Vitaly Shklyarov, a political prisoner of Belarusian origin but with an American passport. Three days later, Shklyarov flew to Washington.

Tsikhanouskaya continues to meet with the Western officials and politicians – Foreign Affairs Ministers of the Baltic States and Canada, and representatives of the Scandinavian countries. Meanwhile, Lukashenka met with the head of the Russian Foreign Intelligence Service Sergei Naryshkin. The press secretary of the Russian president noted that the main thing for Putin and Russia is not relations with the Belarusian president but relations with the Belarusian people.