The rebirth of a symbol 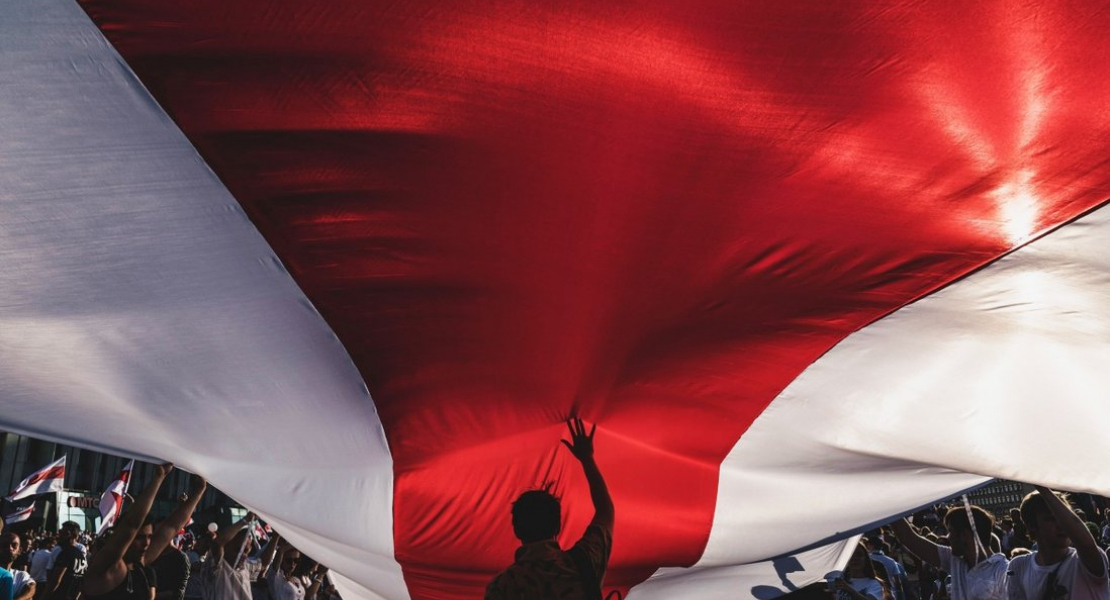 The symbolism of protest waves is an eternal part while researching all kind of different demonstrations and their objectives. The symbol, or in the case of Belarus the colours of the democracy movement are undisputed white and red, specifically the white-red-white flag of Belarus, which was already the official state flag from 1991 to 1995. Looking at the events in Belarus since summer 2020, it is impossible not to mention the “БЧБ flag”, which today is considered one of the most important identity-creating attributes of an independent Belarus.

However, the summer of 2020 is not the beginning of the history of the Belarusian national flag. The colours red and white were already the colours of identity for Belarusians in the times of the Lithuanian Grand Duchy and the Rzeczpospolita. This finally manifested itself in the revolutions of the 1910s and the collapsing Tsarist Empire, as well as in the founding of the Belarusian People's Republic in 1918. The white-red-white flag became the state flag for the short period of BNR's geopolitical existence. With the Soviet takeover, the flag disappeared from official historical awareness for many years, except for the exile-government in Poland during the interwar years.

Only with the collapse of the Soviet Union and the achievement of independence in 1991 the white-red-white flag became again state symbol and the Pahonia the official coat of arms. The presidency of Aliaksandr Lukashenka is fundamentally connected with the recent history of these national symbols of Belarusians. Thus, one of Lukashenka's first initiatives in 1995 was to reactivate the symbols from the Soviet era through a controversial referendum. Only the hammer and sickle were omitted from the state flag. The white-red-white flag was the “flag of opposition” from that point on, with public display and sanctioned policies by the state.

The white-red-white flag was repeatedly visible to the public during the weeks surrounding a presidential election (particularly the 2006 and 2010). Even at smaller demonstrations since the 2000s, the flag appeared again and again. Either if a Belarusian sports team played an international match, the travelling fans presented white-red-white flags under the protection of the non-existent OMON units or the Belarusian diaspora abroad used the colours of red and white more frequently. The white-red-white flag was also displayed several times at the Euromaidan protests in 2013/14. It was striking that in the years from 2015 onwards the Lukashenka administration was aiming to take a step towards greater recognition of the white and red colour, which culminated in the opening and toleration of several Belarusian “national shops”. In these, clothes, kitchenware, and calendars in white-red insignia with figures such as Kalinouski or the Pahonia could be obtained. Also, the colours of some national teams of different sports were no longer exclusively red and green, but also partly white and red.

However, the role of the red and white colours was rather marginal until the dramatically changes in the summer of 2020, when the flag and the colours became the symbols of the whole democracy movement. Beginning with the protest marches on the nights of 9th to 11th of August, through the weekend marches in Minsk and other cities, to decentralized protest walks in the outskirts in the winter of 2020: the white-red-white flag always accompanies the movement everywhere and at any place.1 However, it was not expected that the flag experiences a kind of renaissance in the Belarusian public. In previous years, the flag and coat of arms were too much associated with a “radical, national opposition”. Various surveys published in the German-based Belarus Analysen, show that in 2013 only under 10 % of respondents identified themselves with the white-red-white flag and the Pahonia. Over 67 % were closer to the official state symbols, while 14 % could identify with both options.2

In 2018, the numbers became even more distinctly, where the non-governmental cultural campaign "Budzma Belarusami" determined in a survey, that only 7 % identified themselves with the white-red national symbols, while the identification with the red-green state symbols grew to over 72 %. 11 % identified themselves with both flags and coats of arms.3 However, the opposition's highest approval ratings during Lukashenka's presidency, show how the white-red-white flag has spread throughout the middle of society. Today it is an important mark of identity for a broad number of Belarusians: schoolchildren and students, teachers, doctors, factory workers, professional athletes and even pensioners, who have always been considered Lukashenka's core constituency. The events surrounding the fraudulent presidential elections and the subsequent violence against the peaceful population brought more and more Belarusians onto the streets, making the flag an increasingly present part of the public sphere. Ultimately, the white-red-white flag stands for a Belarus without Lukashenka and for the self-image of a separate, independent identity.4

From a state perspective, too, dealing with the "symbols of opposition," as it was often called in the jargon of state institutions, came back on the agenda. In the process, the state mass media attempted to discredit the flag, as well as the entire democracy movement, in an unprecedented propaganda strategy. The aim was to give the flag a "fascist" narrative and to associate it with the time of occupation during World War II. Reference is made to the fact that the German occupiers in Belarus tolerated the white-red-white flag among Belarusian collaborators. The fact that the flag never had an official status during the occupation, or that the architect of the flag Klaudsij Dusch-Duscheuski himself later ended up in a concentration camp is concealed in the news programs. An ideological connection between the former collaborators with the Third Reich and today’s democratic movement is also from an analytical perspective unfounded. In the state media, as well as among Lukashenka’s supporters, there is a constant attempt to pay homage to the current Soviet-influenced red-green state flag and to promote its public display. Since autumn 2020, they have been increasingly seen in the townscape of larger cities, as well as being widely represented at pro-Lukashenka demonstrations. The consequences of the protest summer and winter of 2020 regarding the white-red-white flag: the appearance of the national flag in public is forbidden and is punishable, ranging from fines to imprisonment. White-red-and-white flags and other products are not currently being sent abroad from the territory of Belarus, as they are being confiscated by Belarusian customs authorities.

The rebirth of the white-red-white flag is in full swing and the process of national self-determination still not complete. Generally, the renaissance of the flag is not primarily related to the feeling of national revival of Belarus, but more likely intended as a symbol of protest for democracy and against Lukashenka and his preservation of power. In this sense, the flag, as a symbol of resistance, guarantees much hope for the fight for democracy and the rule of law in 2021.

Originally published on Bialorus2020studium.pl in Polish