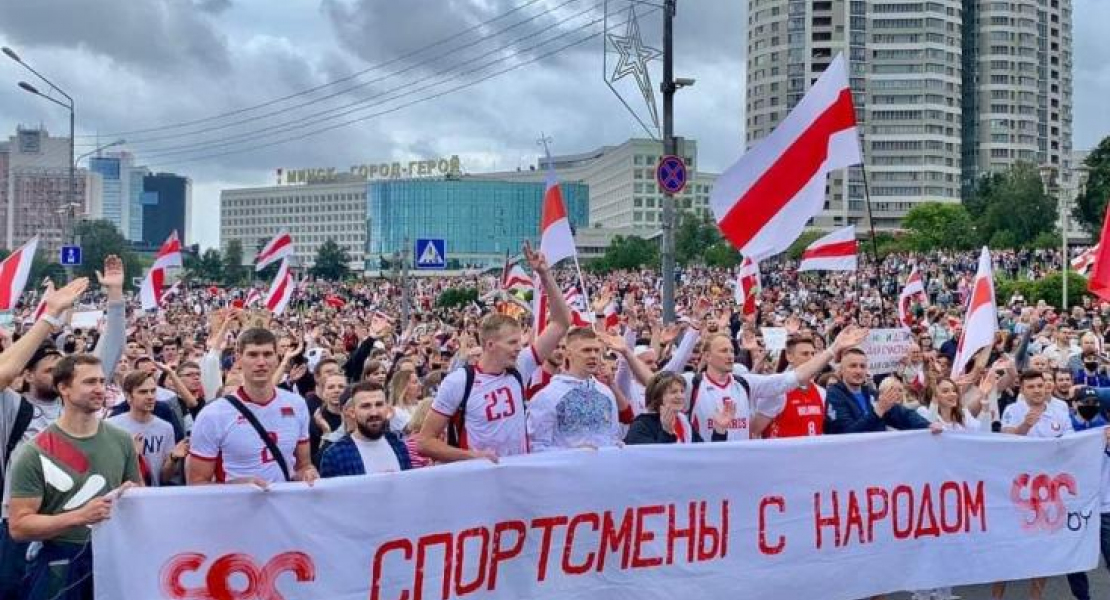 The protests and political crisis in Belarus have also affected the Belarusian sports world. In Belarus,

sports have been part of the political doctrine, as in many other authoritarian states,

it has a particularly important role within the orientation of the state. Thus, a successful sports orientation serves the legitimacy of the prevailing politics as well as the mass mobilisation in the interior of the country.

This was the case during the Cold War between the US and the Soviet Union in the second half of the 20th century, as well as in the 21st century, as major sports events were used for domestic and international policies. As a result, sports in Belarus is political. This can be observed looking at the structure of sport in the country where Aliaksandr Lukashenka is the chairman of the National Olympic Sports Committee (NOC). His son Viktar Lukashenka is one of the vice-presidents of the Belarusian NOC.1

Thus, sports and politics in Belarus are fundamentally rooted in one another, even though this is contrary to one of the fundamental values of the Olympic Charter, namely that sport is to be separated from politics.2

The development of civil society in Belarus in these weeks can also be seen in the field of sports. During the protests, a broad front of professional athletes was formed, who founded the “Free Association of Athletes in Belarus” and regularly took part in demonstrations against electoral fraud and violence. In the process, well-known personalities in Belarus articulate their demands via videos on social media, such as Telegram and Instagram.3

As a result, athletes set out on a terrain that the state has been fighting for almost two months now, namely the development of alternative structures vis-à-vis the state apparatus. Great attention – one of the instruments that Lukashenka has always known to use and which the athletes are now using – was obtained in the first weeks after the elections in August 2020, in which the election was not recognised, violence by the state authorities was condemned and a comprehensive boycott of all sport events was considered. This document was signed by more than 200 athletes and people associated with the field of sports.4

Participants in the movement are well-known athletes from all over the country, such as sambist Stepan Popov, swimmer Aliaksandra Herasimenia, Basketball player Yegor Meshcheryakov, Volleyball player Artur Udrys, Football player Vasili Khomutovski, Track and field athletes Nadseja Astapchuk and Maryna Arzamasova, Handball coach Konstantin Yakovlev, Basketball player Ekateryna Snytina, as well as her well-known colleague Elena Levchenko, who was arrested on 30th of September 2020 at the airport in Minsk and caused a big dismay among colleagues.

Previously, Belarusian athletes who took part in demonstrations, such as Futsal national player Sergei Podalinski and football national player Anton Saroka, were arrested.5 Athletes, who have a european- or even worldwide reputation have been very cautious about the situation in Belarus, including tennis star Viktoria Azarenka, multiple Olympic champion Darya Domracheva and football legend Aliaksandr Hleb. All three had more or less to do with Lukashenka in the course of their careers and so far, did not positioned themselves as clearly as their other sports colleagues.

In addition, the major sports events in Belarus, which reached their peak with the European Games in summer 2019, were enormously important milestones in the Lukashenka era. In these, Lukashenka was able to present himself - albeit only to a certain extent - to the European sports public as a perfect host.

The European Olympic Committee, the institution that launched the European Games, thus gave Lukashenka this publicity. The next major sports event, which is eagerly awaited in Belarus, is the Men's Ice Hockey World Championship, which is now scheduled to take place in May 2021. Belarus successfully applied with its co-host Latvia in 2017, but Prime Minister Krisjanis Karins has asked the International Ice Hockey Federation (IIHF) to reconsider Belarus as co-host.6

Due to the ongoing situation in the neighbouring country, Latvia's Prime Minister prefers a new co-organiser alongside Riga. A commission of experts will assess the situation in Belarus this autumn and present a recommendation to the IIHF. If Belarus is indeed deprived of the right to host, this would set a precedent in the history of major sports events on the European continent. This would be a heavy blow to the current authorities in Minsk and would result in a major legal aftermath.

Not only is the ice hockey world affected by the situation in Belarus, the European Football Association (UEFA) also planned its congress in Minsk in March 2021. However, it was transferred to Switzerland at the end of September, due to self-isolation restrictions in most countries, after their return home from Belarus.7 Officially,

the UEFA did not indicate any political message to Belarus, but it is an open secret that the current situation in the country did not allow adequate planning and implementation of the Congress.

All in all, the high activity of professional athletes of all kinds shows the claim to be part of the democracy movement and make its contribution into it. However, it remains open to what extent their activism influences the policy makers in Minsk and brings a possible dialogue into play.