All-Belarusian People's Assembly: Will There Be Any Consequences? 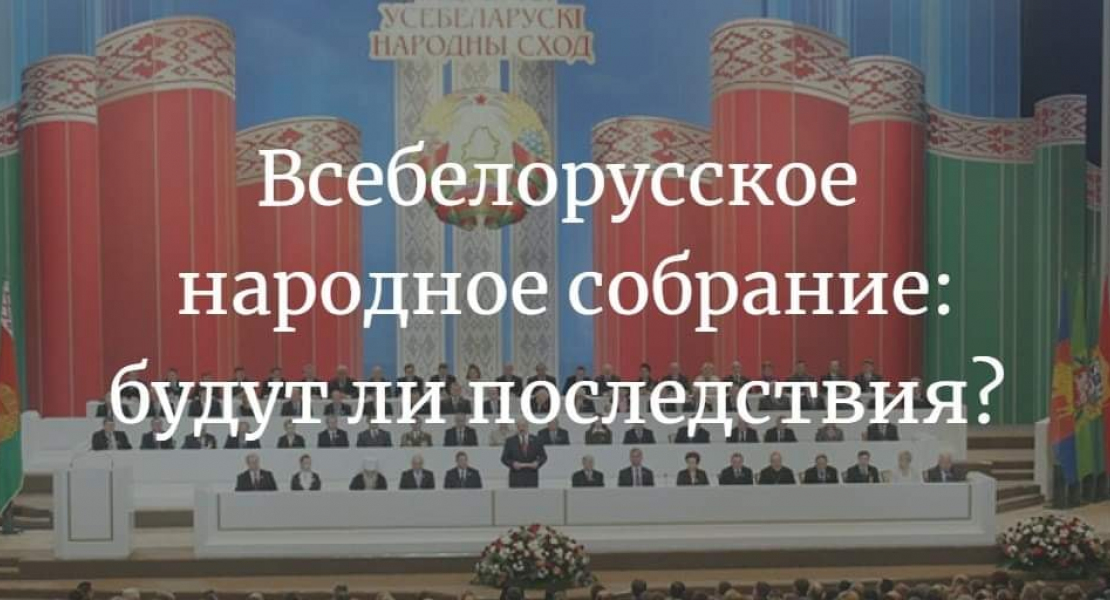 On January 28, 2021, Belarus in Focus weekly analytical, Press Club Belarus, “Our Opinion” – the website of the Belarusian expert community and the Belarusian Institute for Strategic Studies (BISS) held an international online meeting of the Expert and Analytical Club to discuss the prospects and significance of the upcoming All-Belarusian People's Assembly

Besides, Anais Marin, Evgeny Gontmakher, and others also took part in the meeting.

● “The All-Belarusian People's Assembly is a voluntaristic expression of how Lukashenka envisions democracy” (Tatsiana Chulitskaya);

● “The All-Belarusian People's Assembly will be an announcement of a new form of legitimation” (Piotr Rudkouski);

● “The current parliament is the fifth wheel to the coach of the authorities, and the All-Belarusian People's Assembly will become the sixth” (Yury Drakakhrust);

● “A part of the activists still lives as if it is the election campaign, when everything was very fast and everything was possible” (Ryhor Astapenia).

From routinism to changes in the Constitution

In general, the experts do not expect much from the All-Belarusian People's Assembly: “The meeting will be a routine one” (Drakakhrust), “There will be a completely vapid meeting” (Rudkouski), “You should not expect revolutionary decisions from the All-Belarusian People’s Assembly” (Chulitskaya). Chulitskaya calls the Assembly “a voluntaristic expression of how Lukashenka envisions democracy”.

However, Ryhor Astapenia believes that the Assembly will outline what happens next as even state officials would like to hear at least something from Lukashenka about the future. And Yury Drakakhrust notes that Lukashenka himself does not know whether he managed to stop the 2020 protests or they will go on for years. Therefore, he will try to prepare both scenarios for the Assembly.

● The fuction of the All-Belarusian People’s Assembly

According to Piotr Rudkouski, the fact that the Assembly takes place now means that the authorities want to show that the situation is the same time as in the previous five-year period. Besides, this Assembly will be used as a tool to renovate the regime’s legitimation. This is more relevant than ever – after all, all past legitimation schemes have been shattered by electoral fraud, and the social contract is being destroyed by the economic stagnation and state policies during the pandemic. Therefore, Rudkouski expects "an even greater demonstration of like-mindedness, harmony and optimism than in the previous years" from this year’s Assembly. However, he recalls that at the 16th Congress of the Communist Party of Romania in 1989, Ceausescu's speech was interrupted 62 times with applause; however, this absurd demonstration of the dictator’s support carried to its ultimate did not bring any benefit.

Tatsiana Chulitskaya notes that during the period after the elections it was the opposition that set the agenda to which the authorities were forced to react, sometimes with a mirror image (motor rallies, women's forum). The Assembly is the first step for the regime to impose its agenda; it is an attempt of the propaganda "to convince at least its supporters that Lukashenka is still ready to be the leader of the nation and represents the interests of those who support him." Otherwise, it will be a failure.

According to Yury Drakakhrust, indeed, there were plans to resolve the constitutional issue at the Assembly, but these plans were corrected – either cancelled or postponed. This is evidenced by the decrease in the activity of the platforms to discuss such changes. He draws attention to the fact that back in September Belarus submitted a document to the OSCE which stated that the constitutional reform would be held in the country before 2022.

According to Tatsiana Chulitskaya, the authorities can present the schedule and the plan of reforming the Constitution on the Assembly. Ryhor Astapenia also expects a sketch of the Constitution with milestones.

● Upgrading the status of the All-Belarusian People’s Assembly

Piotr Rudkouski believes that “the Assembly will be the announcement of a new form of legitimation,” an overture for the future. Since the authorities can’t hold the elections even having near-total control over the process, in 2020 the system has collapsed. Therefore, in the future, the Assembly might receive a high status similar to the General People’s Congress in Gaddafi’s Libya.

Yury Drakakhrust expects that in November the Belarusian parliament might make this kind of move. However, in his opinion, the Assembly will fit badly into Lukashenka’s state system: “The current parliament is the fifth wheel to the coach of the authorities, and the All-Belarusian People's Assembly will become the sixth”.

However, as Ryhor Astapenia notes, according to a recent poll by Chatham House fewer than 20% of Belarusian citizens believe that the Assembly represents Belarusians and that its decisions can be trusted. And even among Lukashenka's supporters (20% of the society), the Assembly does not have much support with only half of his supporters also supporting it. Nevertheless, Astapenia believes that the Assembly will assume some minor powers.

● Amnesty for the political prisoners

Yury Drakakhrust believes that the regime is at least working out on such an option and that the regime speaks about the amnesty using Yury Vaskrasenski for a reason. At the same time, Lukashenka dismisses the possibility of the amnesty with his “if you stole – give everything back” speech (what should Ihar Losik, a popular Belarusian blogger behind the bars “give back”, for example?).

Tatsiana Chulitskaya agrees that Lukashenka’s recent statements reduce the chances of the amnesty – “and then what will Vaskrasenski and other dialogue impostors do there?”

The reactions of Lukashenka's opponents to the Assembly

Yury Drakakhrust believes that “all the measures that the opposition was preparing were tailored to a different scenario of the Assembly – if it changed the Constitution and became a de-facto constitutive assembly in essence”. In that case, the calls for sanctions against the so-called Assembly delegates sounded logical. However, in case the Assembly only approves a five-year plan – then what kind of a crime is this?

Piotr Rudkouski agrees with him: “Everyone has a right to gather his people for any kind of the event,” and the opposition put pressure on the Assembly delegates when there were more serious expectations from this event.

Tatsiana Chulitskaya recalls that the Assembly will also be a reason protest mobilization, but whether the protests will take place or not is unclear. And the authorities will clearly prepare for this.

Yury Drakakhrust considers Schod to be a useful initiative: both for mobilizing supporters and, as a contrast, “to show that we elect people here”. Piotr Rudkouski agrees with this: Schod can demonstrate a real discussion. The society is ready for such a discussion. Tatsiana Chulitskaya also points to the importance of holding educational events to delegitimize the All-Belarusian People’s Assembly and to explain to people that the Assembly only pretends to be democratic.

Ryhor Astapenia, however, believes that the opposition failed to promote its own agenda amidst the preparations to the Assembly. In his opinion, both Schod and Democratic Forum failed to become something big. However, the All-Belarusian People’s Assembly is not recognized as something serious as well.

In the long run, some other attempts to build organizations and parties may also be required. Piotr Rudkouski calls this “the method of a thousand seeds”: whichever of many different ideas works out, it is better than nothing.

Tatsiana Chulitskaya believes that any associations, even small ones, are useful locally; however, if the ideas fail at the national level, this is bad. However, one way or another “it is important to restore the feeling of the majority among the supporters of changes,” and unification can contribute to the realization of their strong political subjectivity. However, the researcher fears the conflict between different initiatives, the scourge of the Belarusian opposition: “It is important that all of this unites people, and does not contradict each other”.

Ryhor Astapenia is wary that “some of the activists still live as if it is the election campaign where everything was fast and everything was possible,” and there was at least a formal reason to gather. Now everything is slow, the laws do not work, and it becomes more difficult to gather people. However, he considers internal structuration to be “one of the most important things that the democratic forces can do” to unite people with leaders. And although “it is clear who can be a symbolic leader,” when it comes to hands-on leadership there are difficulties. Astapenia draws attention to the fact that now the leaders' messages became very general and alienated from people's lives. The political leaders discuss sanctions and repressions, other topics such as education, economics, coronavirus, and so on that were present during the campaign are now disappearing from the agenda. And "people are still waiting for the image of the future." 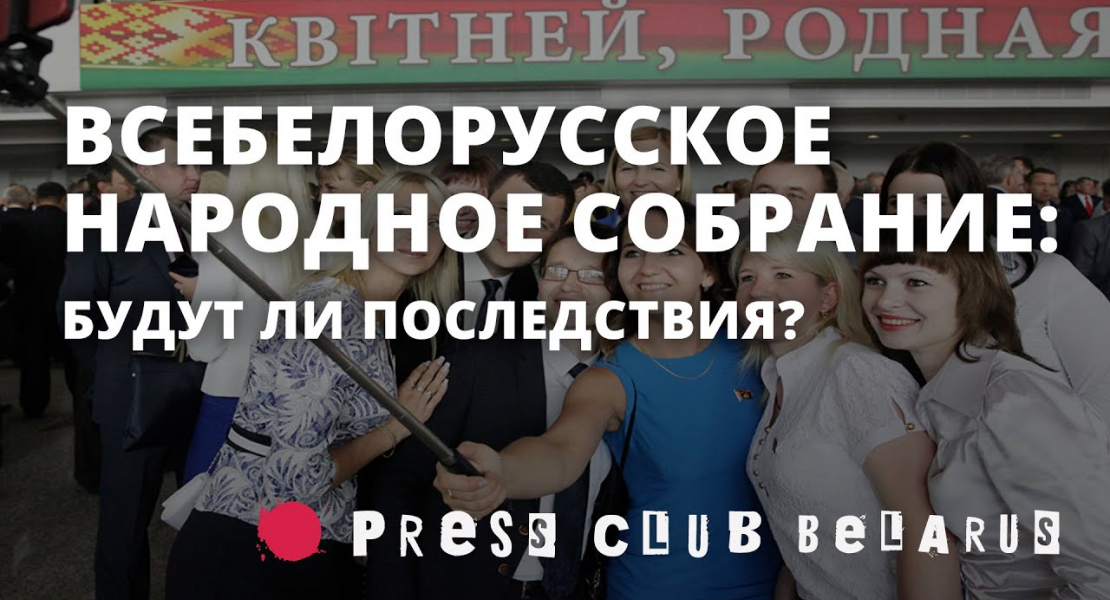