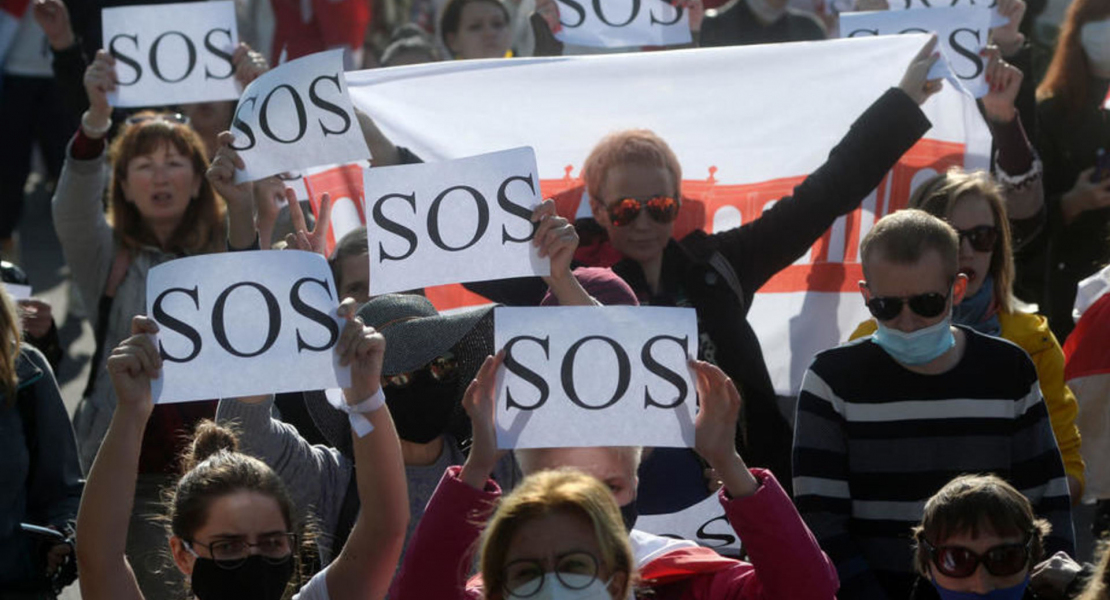 The protests including hundreds thousands of participants have been taking place every weekend following August 9. On Saturdays there are women’s marches, on Sundays the entire nation protests take place. The continued violence of special forces including using water jets and armored personal carriers, gas and diversionary garnets, as well as multiple firing in the air is not enough to stop the protests. The total number of arrests following the elections is over 11 thousand people. On September 18, a man set himself on fire near a police station in Smolevichi as a sign of protest.

The repressions are on the rise and they are losing the cover of even alleged legitimacy. An agreement with a lawyer is now recognized as a criminal intention, while asking police officers to introduce themselves is a crime. Special forces officers testifying as witnesses provide testimony in court using aliases, wearing balaklavas while being broadcast in video messages. The ministry of internal affairs requests the Parliament to legalize this anonymity while the Telegram-channel NEXTA is publishing personal data of thousands of special forces officers.

Given the repressions, the protestors taking part in mass rallies have been very active on a local level. Throughout the entire country local communities are being formed in districts, areas and yards. There is a special map where one can find local Telegram-chats, in which neighbors come together for mutual help, having local meetings and forming columns for taking part in Sunday protests. Independent student structures are being formed in universities, with their demands reaching far beyond the system of education. Despite the fact that in several universities both security guards and police are watching the order, it is not possible to stop the solidarity actions.

The country’s political crisis has a significant negative impact on the most active sector of Belarusian economy, IT-industry. Many companies are forced to move their offices abroad or are planning a partial relocation for their employees. According to experts, IT-sector is experiencing a daily loss of $100 thousand. Four top employees of one of the most famous companies, PandaDoc, were put under arrest and accused of fraud. Earlier the company’s founder, Mikita Mikado, openly stated his opinion regarding the ongoing events in Belarus and offered financial assistance to those special forces officers who choose to resign.

Another criminal case has been initiated with charges against the staff of Beltyazhmash who provided premises for the headquarters of oppositioner Viktar Babaryka. The offers made by the country’s business community have been ignored by the authorities, while average wages in Belarus are decreasing.

At the same time funds and projects that help those affected by the actions of the authorities (BY_help, BYSOL, Honest people (Chestnie Lyudi), Media Solidarity Belarus and others) have raised over $6 ml in donations.

Foreign Policy: Tsikhanouskaya – to the West, Lukashenko – to the East

Svetlana Tikhanovskaya is strengthening her foreign policy legitimacy. The Lithuanian Seim recognized her as the “chosen leader in Belarus”, while in Brussels she had a meeting with MFA heads of EU countries and her video address was broadcast at the urgent debates regarding Belarus in the frames of the 45th session of UN Human Rights Council.

The European countries and the USA have stated that they will not recognize Lukashenko as the country’s legitimate president after his inauguration. On September 17, the European parliament adopted a resolution on Belarus that does not recognize the elections and its results with Lukashenko having been elected as the president-elect. Moreover, financial assistance is to be frozen and EU policy on Belarus is to be reviewed with launching sanctions aimed at those responsible for false elections and repressions. The sanctions are yet to be launched due to the position of Cyprus (that does not mind the sanctions themselves, however, regards them with similar sanctions against Turkey).

The negotiations in Sochi, held on September 14 with Lukashenko and Putin present, did not result in memorandums or any signed documents, even though Russia did make a promise of providing a loan to Belarus equivalent to $1.5 billion divided into three tranches.