A New Generation of Activists 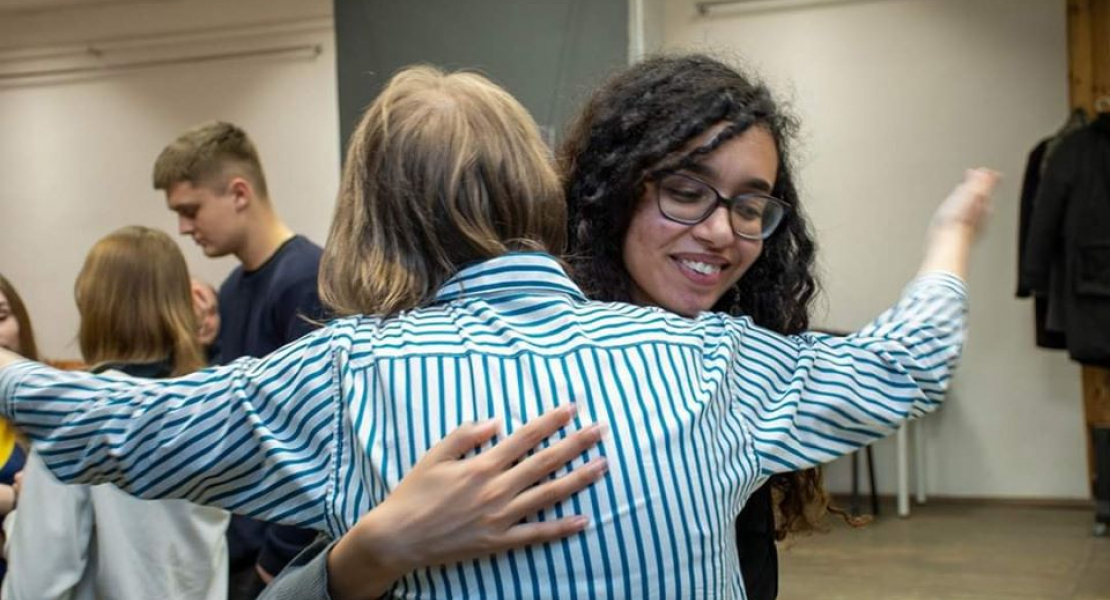 On February 24th, 2020, Press Club Belarus, “Our Opinion”, the website of Belarus’ expert community, Belarusian Institute for Strategic Studies (BISS), and Belarus in Focus weekly analytical monitoring held a regular meeting of the Expert Analytical Club to discuss the activities of a new generation of Belarusian activists.

The main speakers were the representatives of the youth initiatives, as well as those who study them and work with them:

Some other youth activists, volunteers, representatives of international organizations, as well as analysts and journalists participated in the discussion – Yan Auseyushkin (BelaPAN), Anatol Pankouski (Our Opinion), Maryna Sakalova (ECLAB/BIPI), and others.

The participants discussed the following questions: 1) Who are the new generation of activists? Who are these people, what drives them, what are they striving for? 2) What are the main reasons for the participation and non-participation of the youth in public activity? 3) What about the visibility of youth initiatives for international organizations?

Motivation: how and why new activists come to the third sector

The participants of the discussion named the desire to influence the decisions important for young people as one of the most popular reasons for youth activism. They also noted the irresponsiveness of the Belarusian system of formal education to such a desire.

In such a manner,Alana Gebremariam noted that she came to Belarusian Students’ Association (BSA) through the Academy of Student Leadership (ASL, BSA’s program of informal education) because she noticed problems in education such as the problem of the lack of freedom; however, she did not know how to solve these problems. She wanted to get involved in the procedures; however, she has encountered closeness, mistrust, and impediments from the official university organizations.

Hanna Ramanava said that she got to know that there were people who were interested in her opinion only in the last grade of high school when she went to her first-ever program of the informal education – Belarusian Lego,the Essay School of the Liberal Club. At the university she found out that nobody was interested in her opinion, no one regarded her opinion, and nobody supported the independent initiatives, so she started to make a platform in Homiel called Freech which is independent of the university.

Daria Rubliouskaja became an activist via Samoe Radio (Belarusian State Economic University), because "we were not interested in reading the official Economic Journal, and we wanted to promote something different: to voice our interests and concerns and to give the word to the student community."

Valeria Volkogonova summarized this as “a desire to participate in the decision-making process and a feeling of the meaninglessness of [formal] education”. And Sasha Kuzmich believes that the main motivation for youth activism today is the more or less the same as it was 8 years ago when she came to study at the ASL: “It’s fun for the youth to be a part of the community that is aiming to restore justice in the society.”

Two other important factors are the character traits and the surrounding examples of successful activism. So, Volha Pavuk admitted: “The driver of my activism is my nasty character.” However, she notes: “You live in the middle of nowhere and you understand that it needs to be fairer... I’ve defended the weak and the offended starting from high school – it does not sound that nasty". Now, Rudabielskaja pakazucha YouTube channel which Volha authors together with other local activists is pushing for people's activism in Akciabrski: "We teach people to film using their phones the problems that they were afraid to admit to themselves".

Mikhail Doroshevich spoke about the youth activism, citing the results of a study of the Belarusian online audience “Public Organizations and Citizens Initiatives: Participation Potential”, conducted in 2019 by the Baltic Internet Policy Initiative (BIPI) and the Office of European Expertise and Communications (OEEC). He noted that in comparison to other age groups, the young people aged 15-24 have the most positive attitude to the activities of the public organizations and initiatives; they also trust them more than the other age groups.

However, the younger generation also answers “I rather don't trust” more than the other age groups. If we summarize the answers “I trust” and “I rather trust”, then the most trusting towards the third sector are senior citizens.

According to the BIPI/OEEC study, the young people trust the organizations and initiatives in the spheres of environment, human rights, science and research, entrepreneurship and gender equality more than other age groups.

The interesting projects, nice people in the organizations, the possibility of self-realization, and paid work inspires young people to participate in social activism more than other age groups.

Demotivation: what holds back youth activism

Relying on the same study, Mikhail Doroshevich identified the following barriers to youth activism: the young people do not know where to turn, they have no time and no expertise (with age, all these barriers become less relevant for Belarusians).

Valeria Volkogonova noted that the Belarusian youth is demotivated by disbelief in the possibility of change – including because they saw a lot of events that took place for a show.

The participants of the discussion recalled the fear of repression as a deterrent. In such a manner, Volha Pavuk believes: “The people perceive everything which takes place outside of the state as something terrible: they are scared by their parents, they are scared by their school.” Daria Rubliouskaja compares the situation with the scales – safe pro-governmental Belarusian Republican Youth Union is one scale, and interesting but risky alternatives are on the second scale.

Features of the new generation: reflective and taking care of itself

The representatives of international organizations notice that young activists are sensitive to the issues of discrimination and take care of themselves trying not to burn out “in literally, a year or two”. This practice can be called pragmatic as opposed to the flag-waving of the previous generations. Sasha Kuzmich agrees with this assessment: “We don’t need a generation of people who have taken too much upon themselves and died.”

Sasha also notes reflexivity in the new generation (they are looking for logic, trying to work on themselves) and their willingness to take responsibility. However, at the same time, the lack of experience leads to the fact that even the presence of the developed step-by-step plans may not produce results. However, young activists are reluctant to learn from the older generation.

“I did not come to your sector”

What are the connections of the new generation of activists with the third sector? The participants of the discussion had polarized opinions.

Some young people want to engage in social activity, but at the same time, they are not very eager to be a part of some kind of an established community of activists. As Hanna Ramanava notes: “I didn’t come to your sector, I just started to do what I like in my city, and the representatives of the third sector here say: “Ah, so you are with us.”

Others, on the contrary, feel the support of the third sector, like Volha Pavuk: “We quickly became surrounded by the help of the media and the lawyers. It helps us not to enter awkward situations and not to get fined all the time”.

AndMaryna Sakalova believes that there is no third sector at all, “which you can enter or exit,” there is simply social activity and a joint solution to the problems.

Yan Avseyushkin’squestion regarding whether the youth organizations perceive their activities as political caused a heated discussion.

On one hand, Hanna Ramanava rightly noted that the initiatives are different, not necessarily politicized. On the other hand, Volha Pavuk and Alana Gebremariam recalled that in Belarus people hardly distinguish politics and policy: “People are willing to count all advocacy activities as politics, and the state uses it”. However, Anatol Pankouski believes that it is very hard in Belarus to look for differences between politics and policy, as: "Even If you are doing something fundamentally non-political, but there are many people in your group this becomes politics".

Alana Gebremariam is convinced that the Youth Bloc manages to balance on the border of NGOs and politics, and the Youth Bloc’s participation in the parliamentary elections was only one of the tools for promoting their bills: “We won’t necessarily participate in all the elections in the future”. Members of the Youth Bloc also wanted to show that the public political activity may not be fringe-dwelling, but also trendy, and at the same time pump up their public speaking skills, “feel the electorate”, and test different messages on different audiences.

Volha Pavuk urges not to be afraid of the word “politics” – because otherwise, instead of participating in it, the young activists will give it away to the adults. However, such a perception of politics is not accidental. As Sasha Kuzmich notes: “Politics is a dirty word, it scares away people... Political participation is stigmatized.” Dmitry Kovalgin, who is now engaged in urban activism in Minsk Hrušaŭka neighborhood, having had 10 years of experience in United Civic Party’s youth organization and even Zubr: “It is much easier to deal with urban and social issues when you do not have a political organization behind you and political background.”

How can the youth convey their position to international organizations?

Alana Gebremariam and Hanna Ramanava note that often international cooperation is tied to personal contacts too much. However, Hanna adds that prominence among the international organizations is not at all obligatory for the youth activism: “Some people are OK with doing everything in their group of people”.

Yuliya Stankevich, a trainer in the sphere of a non-formal education sees the natural rotation of the leadership and staff of the youth organizations as one of the reasons for this. Maryna Sakalova adds the problem of the lack of competence to this: how to organize the work with government agencies and donors, how to shape strategy, and where to learn all of this.

In their turn, the representatives of international organizations noted that the visibility barriers were not so great for them: “We know the people who are at least visible in social networks.” However, donors and implementers often do not work with grassroots and unsustainable initiatives, and they don’t see a request “for such a level of advocacy and resources” from the part of such initiatives. The excessive influence of international organizations can be harmful to youth initiatives: “We don’t want a situation when we have created something for the youth organizations and now we teach them our vision.”

Originally published on Наше Мнение. Translation to English by Bellarus in Focus